Taking shape inside and out

The building under construction off Snyder Drive has been turning heads for months as it begins to dominate the local skyline.

As impressive as the 52,000-square-foot structure appears from the outside — especially if you're driving by casually and haven't been through that part of town for a few months — inside is where the real action is right now, as the pool area and mammoth gym at Lockport Family YMCA's new facility are beginning to take shape.

June's anticipated registration sign-up dates for new members can't come soon enough for an optimistic YMCA of Buffalo & Niagara team. They recently provided the Union-Sun & Journal with an exclusive look inside the $16 million facility that's expected to be completed this fall.

Before even putting one foot inside the building, the benefits of the prime, 33-acre location on Snyder Drive are obvious with a 325-space parking lot on the building's south side.

“That's 325 more parking spots than the current Lockport YMCA — and that's no joke,” Shriver said as the tour group walked through what will eventually be the main entrance on the building's south side, leading immediately to the main lobby, reception desk and childcare areas.

Among the building's many architectural features that are designed to capitalize on natural sunlight is a skylight that will be installed near the main entrance. Even without a single light turned on, the state-of-the-art structure benefits significantly from the natural light pouring into each room. It's in stark contrast to the atmosphere of the Y's East Avenue facility, which was built in 1926 and has much less natural light.

Reilly and his LeChase Construction crew broke ground for the new Y on July 28 of last year. The building was designed by CJS Architects of Buffalo.

As of last week, he said, there about 20 to 30 men working on the site each day, depending on what work needs to be done. Most of the main exterior and interior walls are already in place, and the three pools, including a regulation-size pool, are taking form.

From the foyer, down a short hallway, you come to the three locker rooms (one each for men, women and families) that are adjacent to the large gymnasium, which will feature a second-story walking/running path around its entirety.

Also adjacent to the gym area is a multi-purpose room that can be used for birthday parties, kids vacation clubs, instructional classes or a place simply for members to congregate, Shriver said.

Nearby is a large room that features three pools. The largest, six-lane pool is beginning to take shape, with a shallow and deep end. Also being installed within the same pool area are a smaller pool and a toddler pool.

On the second floor, the entire south wall on the exercise area is glass, giving those on the soon-to-be-set up treadmills, bicycles and weight machines a great view and plenty of natural light while exercising. Also on the second floor is a large studio with a wood floor, where exercise classes will be held.

Ilarraza said she liked what she saw on the tour.

“It's looking great. I can't wait to see it open come October and expand our region to Niagara County and the Lockport community,” she said.

Shriver noted that only about five of the 30 acres on the site is being developed by the YMCA initially and future projects on the property are already in the discussion phase.

In June, the YMCA will begin soliciting new memberships at a trailer on the construction site. Varying membership costs are to be announced at that time.

Shriver said the new facility is all about strengthening Lockport Family YMCA's “foundation” locally. Currently, the branch counts 1,346 memberships and serves about 2,400 people.

“This project will enable us to serve four to five times as many people as we're currently serving,” Shriver said. “The project will also be sustainable for decades to come, so the Y's future here will be assured for a long time. This is a great property that we can develop some day for day camps and for other youth sports and recreation opportunities for families. We're about youth development, healthy living and social responsibility — those are the three pillars of our mission.” 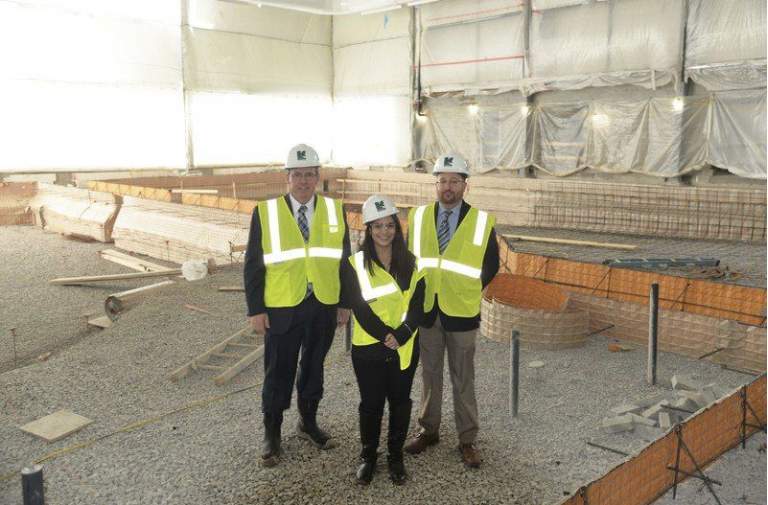