SENECA FALLS — There will be a lot of female faces at Wednesday’s groundbreaking for the next phase of the National Women’s Hall of Fame construction project.

Among them will be Kailly Mintel of LeChase Construction Services of Rochester, who has been chosen as project executive.

Mintel, a Rochester native, graduated from the University of Delaware in 2009 with a civil engineering degree. After working for two companies in the New York City area, she returned to her hometown in 2016 and soon thereafter started working for LeChase.

With previous experience in museum and historical renovation projects, Mintel said she was a natural fit for this project, where she will be responsible for coordinating contracts with all the subcontractors and serving as liaison between the Hall and all parties.

Mintel won’t be the sole female face on the job. Female colleagues also are serving in such key roles as project engineer, 3D imaging expert, and safety manager.

“It made sense that I run this project, and I pulled some women I have experience working with,” Mintel said, adding the idea was then hatched that it might be meaningful to have an all-female team working on a project for the National Women’s Hall of Fame, which Hall officials embraced. “Qualifications were definitely a priority, not just that the team was made up of women.”

Hall of Fame Executive Director Jennifer Gabriel said LeChase Construction was chosen for the next phase of work after a lengthy process.

“All of us who interact with the LeChase team continue to be impressed with their commitment to our mission and their incredible knowledge of the complexities of renovating a 178-year-old building.” Gabriel said. “Kailly has stepped in as a full member of the project team, helping to guide the process to a successful completion by the end of next year. Kailly, the LeChase team, CJS Architects, and so many others are coming together to ensure women’s stories have the home they deserve, right here in Seneca Falls, the birthplace of the women’s rights movement.”

Mintel, who graduated from the all-girls high school Our Lady of Mercy, always had an affinity for math and science. Her father was also an engineer (albeit a chemical/environmental one) and encouraged her to explore the field.

“Whenever I had trouble or needed words of encouragement, he was always my first call,” she said.

The majority of her college classmates were men, but Mintel said some of the kindest and smartest women she met at that time were her fellow engineering students. And, she believes attending an all-girls high school actually helped not to reinforce gender stereotypes.

“I never felt women weren’t invited to those (traditionally male) careers,” she said.

That said, Mintel said being a woman in the construction field has made her “ ... inherently adapt a little bit to exert myself to make sure I’m heard and respected as an equal.”

Most men on construction sites are supportive of her role, and Mintel said she’s had very few encounters where she’s been treated lesser because she’s a woman. She praises LeChase for its flexibility and support of her career, which she is balancing with being a mother to four children ranging in age from 1-6.

Although the official groundbreaking will be held this week, Mintel and her team have been working the better part of a year behind the scenes with Hall staff, planning the project that will transform the second floor of the former Seneca Knitting Mill into usable space. The work includes a new elevator shaft on the building’s exterior with a glass connector; rehabbing the existing spiral staircase and adding a main staircase; the installation of mechanical systems on the upper floors; and preservation of the mill’s original floor. The iconic smokestack on the building’s exterior also will be restored.

Mintel said bids are being sought and she expects onsite work to begin in about six weeks. The project is slated for completion by the end of 2023.

She has visited the mill site many times and is eager to get started.

“The building is amazing,” she said. “Every time we go there we find some new quirky history.”

Mintel was fortunate enough to attend last month’s induction ceremony of new Hall of Fame members and spent time with female construction pioneer Linda Alvarado, who was inducted into the Hall in 2003.

“The energy in the room and sense of empowerment I got ... it was amazing,” said Mintel, who left inspired by the inductees’ impact on the world and fortified to demand equal rights for women in her own way.

She considers her work on the Hall’s new home “ ... my little part in that. It’s really cool to feel like I’m helping the cause.” 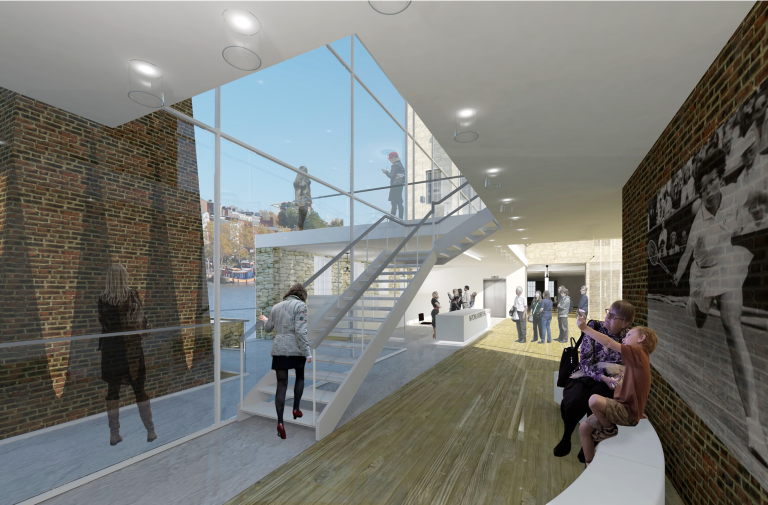