Ithaca’s Visum Development Group has been quite busy lately, with development plans for the former Ithaca Gun Factory site and smaller projects underway in Collegetown. Now the firm is adding another item to their cart with revived plans for a multi-story residential development on Cherry Street in Ithaca’s West End.

A revised Site Plan Review (SPR) application for 132 Cherry Street, which Visum calls “The Hive,” was filed with the city of Ithaca last month, and is expected to begin its municipal review process in the next few weeks.

The latest plan for 132 Cherry is slightly larger than its original submission, from 2020: 174,622 square-feet with 143 rental apartments (24 studio, 64 one-bedroom, 39 two-bedroom, 4 three-bedroom), 50 covered parking spaces with eight more curbside, and two retail spaces, 1,570 and 1,650 square feet respectively. But most importantly, 132 Cherry is no longer one building. The site is comprised of two fraternal twins, 60 apartment units and 83 apartment units respectively, that will share amenities.

The original plans for 132 Cherry Street, filed in April 2020, called for a 159,180 square-foot building with 131 apartments, 51 covered parking spaces and about 4,100 square feet of ground-floor retail space. The proposal, along with a second apartment plan at 110 Cherry Street, were waylaid by an effort from West Hill city councilors to change the zoning that would have effectively killed both projects, which led to an admonishment of the Common Council from the Planning Board. A revised zoning update was passed later in 2020 that was enough halt the projects as originally envisioned, but still allowed some possibility of development on the two sites.

Since that time, with the need to revise the submission, the project has been on the backburner as Visum focused on other developments. The development sites were mentioned as the first phase of Visum’s “Neighborhood of the Arts” multi-site development back in March 2021, but that was the extent of discussion on the Cherry Street properties until now.

The new proposal keeps with the city’s preference for designs and materials sympathetic to the historically industrial neighborhood, as the façade uses corrugated metal panels and perforated steel balconies along with usual mix of fiber cement, masonry and aluminum. The buildings rely on a “mosaic of architectural elements” to create a visually interesting profile and to incorporate shadow and light elements in the courtyard and by varying building heights.

In its application, Visum sought to stress that the project is intended to assist in delivering upon Ithaca’s urban development goals for dense, walkable and ecologically-sensitive spaces, and creating a positive impact on the West End while achieving its financial goals. Amenities are concentrated along the southern edge of the site, which will connect to the Black Diamond Trail, to create a more open and less imposing environment. The buildings reduce their bulk by employing setbacks on the upper floors, and will comply with the Green Building Code. About 70 bike rack spaces are included, and discussions are ongoing to help accommodate a new TCAT Route (Route 30) through Cherry Street.

The apartments will be market-rate and intended for the general rental population of Ithaca — logical, given that Cherry Street is relatively far from Cornell and Ithaca College. Planned amenities include rooftop lounges, a swimming pool, fire pit, picnic area, fitness room, yoga studio, community kitchen and package room. As with the original proposal, CJS Architects of Rochester is in charge of design for the new buildings, with Fagan Engineering and Jensen/BRV Engineering working alongside them on the project team.

The filing identifies the need for one zoning variance, that being a front yard setback for 15 feet from the sidwalk. Based on conversations with planning staff, the parking curb would be on the property line, and a treelawn is desired next to the curb and sidewalk. The width of the parking lane, curb, sidewalk, treelawn, and 15 foot sidewalk set the buildings too far back for aerial fire equipment, so Visum is requesting to eliminate the setback and just have the parking lane, curb, sidewalk and treelawn.

Quick side note, due to the flooding risk along Cherry Street, residential uses aren’t allowed on the ground floors of buildings. Here, Visum intends for that to be the covered parking, hidden behind architectural perforated metal screening, amenities spaces, and the retail spaces.

According to the SPR filing, Visum hopes to have approvals to pursue construction permits later this year. The $23.6 million project would begin construction, two phases with one building per phase, starting in September. The first building would be completed by late summer 2023, and the second building finishing in late winter or early spring 2024. 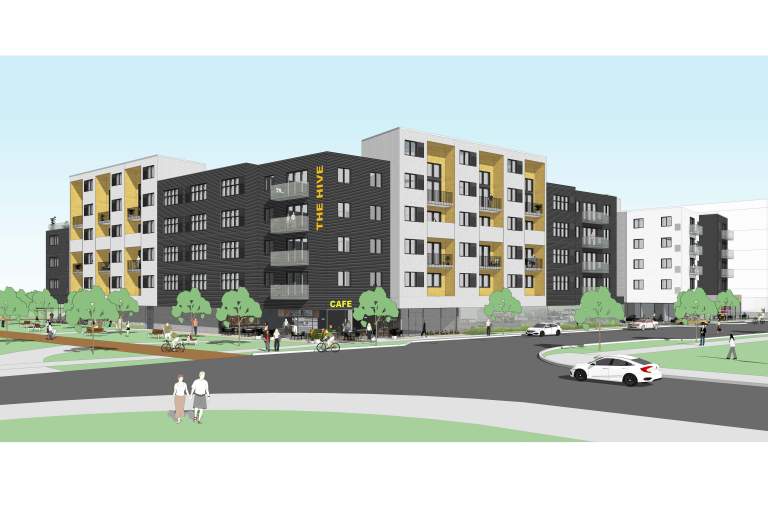 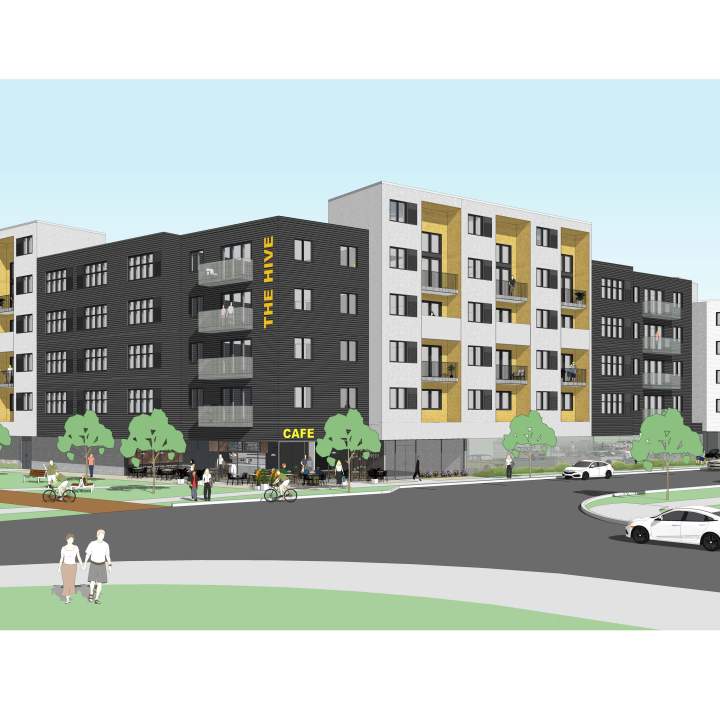